Led by Mainland Head Coach Robbie Tice, the Sea to Sky BMO Academy is a step on the pathway to BCSPL, Girls Elite/Boys MLS, professional soccer, scholarships, and national team opportunities. BMO Academy players earn opportunities to showcase their talent, including events like the High-Potential Player (HPP) program. BMO Academy players also have the opportunity to be invited to the Prospects program, which includes additional training, and a connection to the clubs Pre Girls Elite and Pre Boys MLS academies in Vancouver. 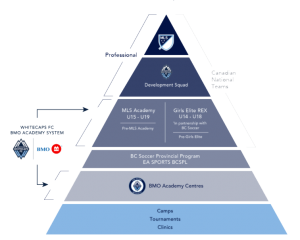 Due to Covid-19, Fall/Winter Sea to Sky BMO Academy training has been postponed until the Spring of 2021.
Please continue to check back for more information. 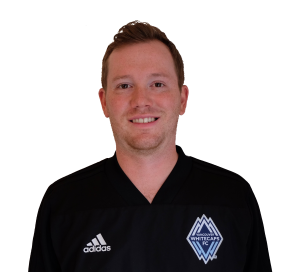 A coast-to-coast network of Academy Centres identifies young talent and provides a gateway to professional soccer, scholarships, and the Canadian national teams, including a pathway to Vancouver with the Boys MLS Academy and the Girls Elite REX program.
Provincial Centres are in many cases in partnership with provincial soccer associations. Players identified here have a pathway to the Whitecaps Boys Residency and Girls Elite REX programs in Vancouver. BC Centres are part of the local pathway and provide players with an opportunity to support selection to the BCSPL (BC Soccer Premier League), as well as the Whitecaps Prospects, and full time academies. All centres are supported by the Whitecaps Caps to College program.

A full-time, fully funded player development program. The Academy is designed to maximize a player’s potential on and off the field through a “soccer lifestyle” philosophy linking technical, personal development and education. The program includes over 65 players with the Academy housing U-15, U-17 and U-19 teams that play in the new MLS Elite Youth Development League.
The Academy continues to develop top young talent from across Canada at the club’s new Whitecaps FC National Soccer Development Centre (NSDC) which opened in 2017. In the past year, five players from the Academy ranks have signed MLS contracts with the Whitecaps FC first team, with Academy graduate Alphonso Davies making an MLS record transfer to perennial German Bundesliga

Whitecaps FC, BC Soccer, and Canada Soccer have partnered together to deliver a Super REX (Regional EXCEL) Centre, which brings together top female prospects from across Canada to attend school, train, and play together on a daily basis.
This Super Rex program is one of only three in Canada – (BC, Ontario and Quebec) welcoming the very best U-14 to U-18 high performance female players on a pathway to national team and scholastic opportunities.
Across Canada the Whitecaps FC identify and select players by working together with Canada Soccer, and through official partnerships with the provincial associations of British Columbia, Alberta, Saskatchewan, Manitoba, Nova Scotia, Newfoundland & Labrador, and Prince Edward Island. Recent Academy graduate Jordyn Huitema is a key member of the Canadian national team and has recently signed with French Division 1 club Paris Saint-Germain.

College and university scholarship opportunities are one of the goals of the BMO Academy System. Players have support from Whitecaps head coaching staff and college transition experts to prepare for the best opportunity to play in college and university.
Off Field the program is Led by Whitecaps Manager of Collegiate Transition, Ryan Clark who works towards supporting and executing player scholarship strategies.

BMO Academy Centres: A coast-to-coast network of Centres and staff identify young talent and provide a gateway to professional soccer, scholarships, and national teams programs, including a pathway to Vancouver with the Boys MLS Academy and the Girls Elite REX program